If there’s one thing that unites every vacation itinerary, it’s food. Whether your idea of a vacation is relaxing on the beach or in a cozy mountain lodge, the dining choices you make while on the trip can make or break the whole experience. It’s ironic that this is the case, because the majority of vacationers completely forget to make dining plans before they leave. That’s why we decided to create this list of the best places to get food within walking distance of the Sandy Beach Resort. If you’re staying at the resort (or even in the general area), you can’t go wrong with any of the following dining suggestions.

First on our list is Gordon Biersch Brewery Restaurant, located along Farrow Parkway in Myrtle Beach. This South Carolina staple was opened 20 years ago, with the unique intention of following the German Purity Law. This means that Gordon Biersch uses only the highest-quality Weyermann Malt from Bamberg, Germany and authentic Bavarian Hersbrucker hops and filtered water. The restaurant itself serves traditional bar food, with a high-class twist. A good example is their “Beer-Battered Fish Sliders”, a delicious take on a bar-food classic.

Our next restaurant suggestion for those in the Sandy Beach Resort area is The Bowery, located on 9th Avenue in North Myrtle Beach. This country-music mecca opened in 1944, and it’s live music stage has been played by country music’s best and brightest ever since. In fact, the band Alabama, who were inducted into the Country Music Hall of Fame in 2005, had their start as the Bowery’s house band from 1973-1980 and still play there many times a year. Speaking of accolades, a waiter for The Bowery named Scuba Osborne is in the Guinness Book of World Records for carrying 34 mugs of beer without a tray. The restaurant itself serves delicious traditional style bar food, like “Tammy’s Grilled Bologna Sandwich”.

Third on our list is the delightfully authentic Villa Romana Italian Restaurant, located along S Kings Highway in Myrtle Beach SC. This restaurant originally opened in 1985, and has been serving up savory traditional Italian cuisine ever since. The recipes for the four-to-five course dinners at Villa Romana are mainly family recipes passed down through the generations from the famous Italian chef Mamma Lucia. Villa Romana’s italian cuisine, combined with it’s traditional statues, chandeliers, columns, and a centerpiece fountain will truly transport you to the heart of Italy (all within walking distance of Sandy Beach Resort).

The second to last restaurant on our list is the famous Pier House Restaurant, located on the 2nd Avenue pier on North Ocean Boulevard in Myrtle Beach. The pier itself has been in existence since 1936, even though it’s been destroyed and rebuilt three times due to hurricanes Hazel, David, and Hugo. Because of the restaurant’s location on the pier, you’ll have unrivaled views of the Atlantic Ocean from any seat. On the menu you’ll find beach-themed breakfast, salads, sandwiches, and steaks. An example is their “Wahoo” breakfast omelet, with andouille sausage, shrimp, peppers, onions, tomatoes, and pepper jack cheese.

Last but certainly not least on our list of the top places to get food around Sandy Beach Resort is Captain Benjamin’s Calabash Seafood, located on S Kings Highway in Myrtle Beach. This truly Carolinian style of cooking is defined by lightly-breaded seafood with large portions – and nobody does it like Captain Benjamin. The restaurant opened it’s doors back in 1988, and has been a treasured part of Myrtle Beach dining ever since.

In case none of these restaurants are enough to wet your tastebuds, here are a few honorable mentions:

Candy super-store perfect for your kids or inner child.
ILoveSugar.com 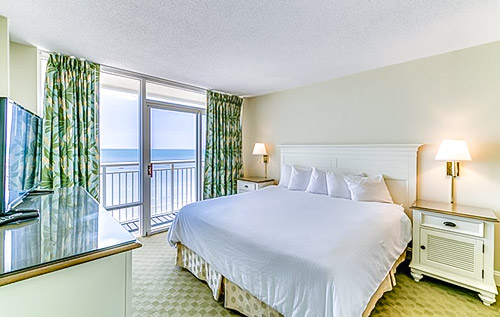